This past weekend was the 1/2 Sauer 1/2 Kraut Half Marathon. If I had to put a title on this half marathon it would be called Hills, Heat and Hell. That’s exactly what this half marathon was. It was full of hills, 75 degrees around the 7:30 AM start time and pure hell. However still tons of fun! The race was at Pennypack Park in the Northeast section of Philadelphia. I had never run in this park before so I was interested to see how it went. And foolishly I didn’t read the course description until after I signed up.

The course utilizes the paved bike path along Pennypack Creek. No traffic at all. You get to run miles and miles within the city limits of Philadelphia without seeing a house or a car at all. The midsection of the course features a bunch of short but steep rolling hills along with a trail section (Mount cuckoo). Some have referred to our course as an Achterbahn (“rollercoaster”). It’s certainly not an easy race, but do-able, a good challenge for the experienced runner.
Is this a Boston Qualifier? Hell no!!!!! !!!This is a summer race, there is a good chance that high temps will make this harder than you anticipate!!! I recommend running the marathon only if you are an experienced runner, who can handle all kinds of  adversity. You have been warned

. No whining on race day.

There is a good chance that high temps will make this harder??? You got that right! But at least I was warned. The path for the run was beautiful though (pics below). It ran along a creek for the majority of the run and from mile 6 to 7 was all throughout a trail. So at least the sights and sounds made you forget you were in hell.

Now for my race break down:

The bib pick up for this half was very underwhelming. It was held in the basement of what looked like a German National club. If it was that kind of club that would make sense considering the run was German themed. Regardless bib pick up left a lot to be desired. They had a few tables set up with a couple of kids giving out bibs and swag. Lucky for me the two kids at my section must have been brother and sister and were fighting while I was trying to get my bib. The entire pick up seemed like a family was running it out of their house. They did have a few displays of the awards they would ultimately give out, which were German cuckcoo clocks. But other than that the Bib Pick up was not a highlight. In and out. The shirt and bag were nice. The shirt seemed like it was a tech material. However it was a deep brown with just the logo of the race on the top left of the front of the shirt.

I already gave a description of the course above. And the description on the website held true to form. There were rolling hills for the majority of the race and the heat was out in full force. But the scenery of the course was beautiful. Being in the city limits of Philadelphia it is hard to find 13.1 miles that isn’t packed with cars or pedestrians. So to be able to run in Philadelphia but with that much open land and scenery made for a great time. Hills and heat aside I loved the course. There were times during the run when I would look around and just take in my surroundings and forget about the run itself.

Course Grade: A- (the minus is for the heat and hills). 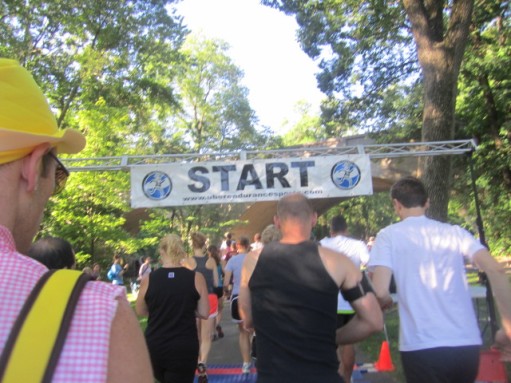 What made this run so memorable was that Bart Yasso started in the same wave as I did. How cool is it that I got to start a half marathon with the mayor of running?? 2 years ago I would have never fully appreciated that moment so I am very happy I got to experience that. I did fight with myself on whether or not I should pass him in the beginning. (I always start out way too fast). I kept thinking “what gives me the right to pass a running legend? I’ve been running for maybe 2 years”. Regardless I went on by him. But like a true running champion that he is he ended up blowing by me around mile 5 and he never looked back. I was grateful to experience that moment.

Overall I enjoyed the race. I’m glad I ran a course that tested me a lot more physically as well as mentally. I would recommend this race.