My review of the race:

Packet pick up was somewhat easy. They held it at a local business complex that was close to the race. They didn’t have the race bag pre-made like most races do. You picked up all of the contents individually and could put them in the bag at the end. My bag was filled with my bib, a shirt and a water bottle. I remember seeing other things like a tote bag and some other items with the race logo on it. It was nice of them to give out more than just your bib and shirt. Can never have too many water bottles! 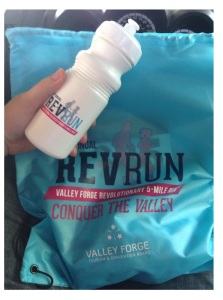 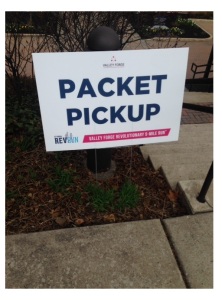 Probably the best thing the race organizers did as far as race logistics were concerned was the way they handled race day transportation. The race brought in somewhere over 1,000 runners. Which meant parking in the park would be near impossible. So they set up an area in a local business complex where you can park your car and shuttle over to the race. Typically this can be difficult because the race organizers do not have enough shuttles and the runners end up waiting forever for a shuttle. This was not the case. In fact it looked to me like they had too many shuttles. I got in and out of a shuttle to and from the race with barely no waiting time because of the amount of buses they had on site. This may have cost the race organizers a little more money, but this runner thanks you for the efforts you made.

Another part of the pre-race festivities was the mini expo that was happening outside. It was a beautiful day for a run, somewhere around 60 degrees. So they were able to have vendors set up offering merchandise and other things you might be interested in. The only part of this I took advantage of was the post race foods. But they had merchants selling items, companies with giveaways and many other things. So it made for a more festive event than just the race itself.

Now onto the race…..

This course is by far the most difficult I have run to date, the amount of hills was too tough to count. Truth be told I signed up for this race very last minute. I am in the middle of half marathon training so I am comfortable with the distance, but I have not been preparing for the hills this course offers. And there were plenty of them. The elevation of the course went as such:

Outside of the hills this was an amazing course to run. Valley Forge Park is 5 square miles long. As a result there are miles and miles of 360 degree scenery to take in. So when you finally make it to one of these large hills you are looking down at a beautiful sight. Along with this, the park is a historic preservation sight. As such they have re-created cabins that Washington’s army would have camped in as well as memorials in remembrance of this. So there are plenty of things to see while running these trails.

Overall I would highly recommend this race. It was a true physical test for me with all the hills, but more importantly it was extremely scenic and there were times on the course that you forgot you were running a 5 miler because of the views. It is also a great way to take in the history of this park and how important it was to our countries birth.

Good luck this weekend runners! Who's ready to get some serious miles in? ⠀⠀⠀⠀⠀⠀⠀⠀⠀ #PhillyMarathon #RunPhilly
You know what’s not overcrowded on January 1st? ⠀⠀⠀⠀⠀⠀⠀⠀⠀ Your local running trail.
Love Run team registration is now open! Click the link in our bio to learn how your team can win entry for just $40 per person!